Hello Lovelies!
I've been off in La-La-Land for the past few days, ever since the new Hobbit Trailer came out on Thursday so that's why there's been no new posts.
I know we've typically been doing the Family Thoughts series with the other sisters, but I thought it'd be fun to change it up and have you all hear what they think about the new movie trailer that just came out for the Battle of the Five Armies movie.
Because yes, I've been obsessing over it that much.
I literally watched it 10 times the day it came out.
*cough*
No knowledge is required of what is going on, it'll be amusing whether you understand or not. xD
Let's get to it! =)

Felicity: I couldn't concentrate the first time we watched the trailer because MK was crying.
MK: I don't cry.
Willow: You were bawling like a baby.
MK: I don't cry.
MK: ...And if I did, it would've been because this is the last ever Middle Earth movie, and I can't accept that.
Felicity: You cried MK, just get over it.

Saige: MK may deny herself crying but I won't. I was sobbing the first few times we watched the trailer.
MK: *hugs Saige* YOU CAN'T DIE TAURIEL.
Saige: McKenna, how many times do I have to tell you?! STOP CALLING ME THAT.

Kaya: To sum up things for non-Hobbit fans, Thorin, the guy in the second picture, has a family problem where they get consumed by gold. It twists their minds and leads them to them being insane-
Charlie: To sum things up; This scene is heartbreaking, and caused MK to cry even more.
MK: I DON'T CRY.

Saige: I think it'd be quicker to make a list of family member who didn't get emotional.
Charlie: Even Kaya squeaked at one part, and she's the most resilient of the bunch. 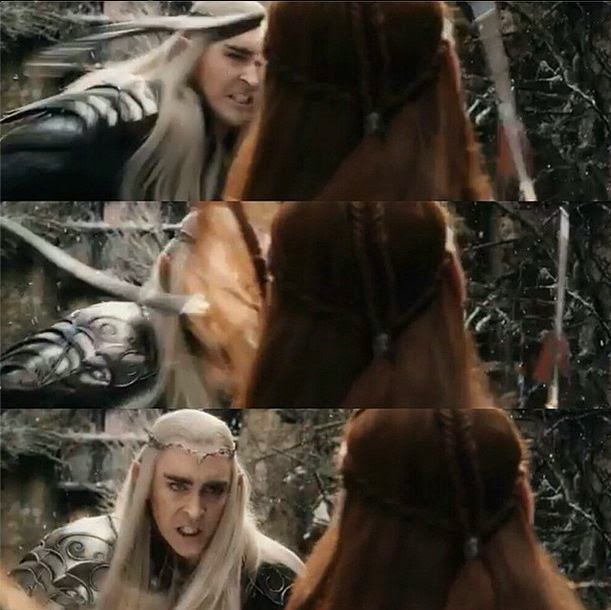 Elizabeth: I'm not even into the Hobbit, but I had to ask the girls to slow down the trailer so I could figure out if blondie hurt the red-head.
MK: "Blondie hurt the red-head." Are you freaking kidding me Elizabeth?!
Charlie: Give her a break MK.
Cecile: We did have to slow it down; it seems like Thranduil (Blondie) only broke Tauriel's (red-head) bow and arrow instead of hurting her.
Saige: Thankfully. I'd die if Thranduil was the one to kill her.

Cecile: The music at this part was really eerie.
Marie: I'm afraid Elizabeth and I are the only ones in the family who don't watch LOTR/The Hobbit, but even I watched this trailer once the music started up.
Charlie: It's amazing music. I'd love to hear you try and find a way to play it on the piano.

Felicity: I wonder if this is before or after Gandalf is at Dol Goldur.
Willow: After, likely. I can't imagine it's a flashback; nobody knew to expect everything that was coming.
Charlie: All I remember thinking at his part is how badly I wanted to strangle Saige.
Saige: ...Why exactly did you want to do that?
Charlie: You were squealing,"THRANDY."
Saige: Huh... I don't even remember that.
Elizabeth: That's blondie right?
MK: Elizabeth when this is over I'm taking you through a quick crash lesson on Hobbit and Lord of the Rings characters. 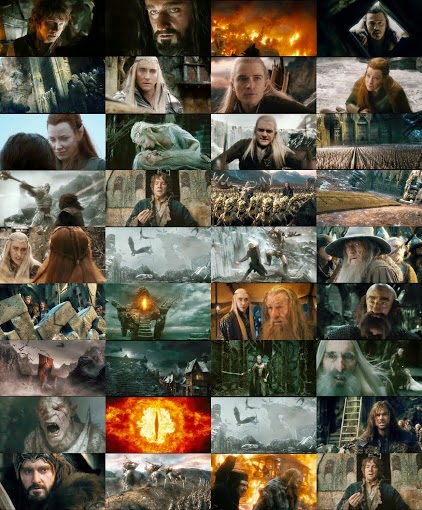 Okay so this post was less than great. :P
I promise I'll have an entertaining and amusing photo-story up on Tuesday. My friend gave me an adorable idea and I can't wait to use it. ^-^

And below is the trailer, for those who'd wish to view it. =)

Have a great Saturday everyone.